Two Men Honored by Fire Board 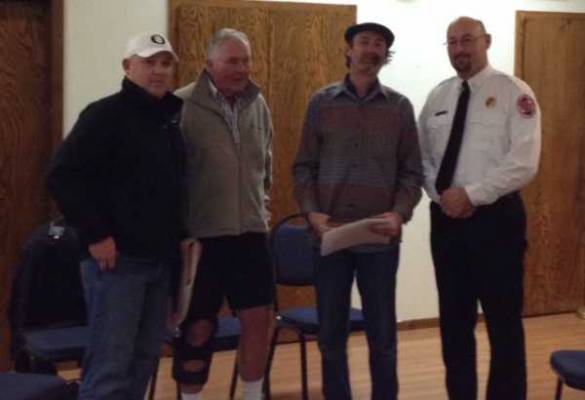 Two men were recognized by the South Lane County Fire & Rescue Board of Directors during the December Fire Board meeting for their willingness to help save a life earlier this year.

The two men came across a motor vehicle accident involving a car and a tree on Sears Rd at the intersection of Molitor Ranch Rd in Cottage Grove on November 14th, 2014. The vehicle was occupied by a single male driver and his dog. After the accident and prior to arrival of SLCFR medic units, the vehicle suddenly caught fire with the driver still inside. The two men immediately removed the occupant, saving him from the fire.

The Fire Board recognized Josh Stevens of Creswell and Rick Wetzel of Dexter for saving the man’s life prior to SLCFR arriving on scene by removing him from the car as it was starting to burn.

The vehicle was fully involved in fire when Fire/EMS crews arrived. Fire crews were able to quickly extinguish the fire and preventing its spread to a nearby tree farm.