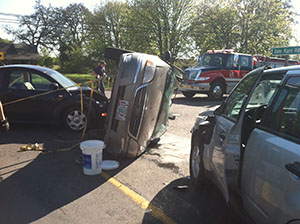 At 4:01 PM Fri April 11th, South Lane County Fire & Rescue responded to a report of a multi-vehicle accident at the intersection between Cloverdale and Dale Kuni Rd. in Creswell. Initial reports indicated that one of the vehicles had overturned.

First arriving units found 3 vehicles had collided causing one to roll on its left side resulting in 2 victims being trapped. Units from South Lane's Creswell Station took immediate action and were supported by additional units from the Cottage Grove and Saginaw stations. A total of 9 rescue personnel and 6 units were involved in the rescue and treatment of victims.

3 patients were transported to Riverbend Hospital in Springfield with non-life threatening injuries. All 3 drivers were alone in the vehicles and each was wearing their seat belt at the time of the accident.

Units from Lane County Sheriff’s Office and Oregon Department of Transportation assisted at the scene. LCSO is investigating the cause of the accident.